What’s With The Cabbage?

Before Xmas I received an email asking me if I had thought about what we were going to do for Veganuary in the shop (eating vegan food in January) it was from someone called Shane whom I presumed to be Shane Red Strand Coffee. I shot back an answer saying thanks for the idea, that it could be good fun and the next thing we got a box of samples in the post from a different Shane altogether of pretty vegan products!

The Veganuary idea does seem like a good idea  – to detox after Xmas, cut down on emissions by not eating meat and generally save our selves and the planet. And we have a lot of vegetables still growing in our garden.

The warm wet weather has the cabbages shining brightly, the leeks are standing to attention and the green stuff – parsley, spinach and kales are quite happy so there’s plenty for eating. 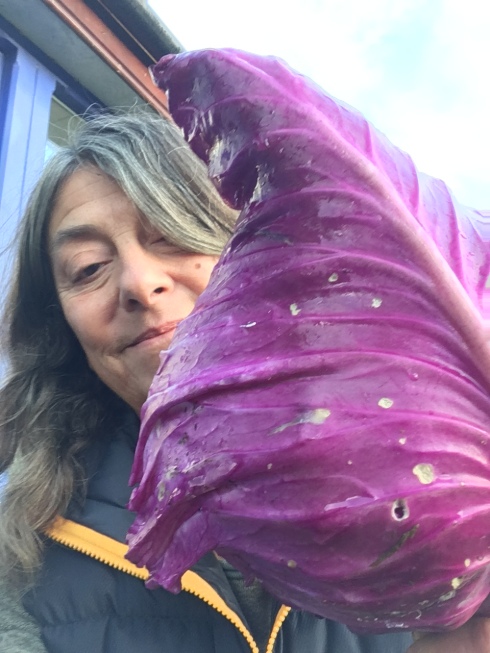 Just the thing for a January detox – I have to say although I don’t take detoxes too seriously, I do think it’s good to make a little effort especially after all the feasting. 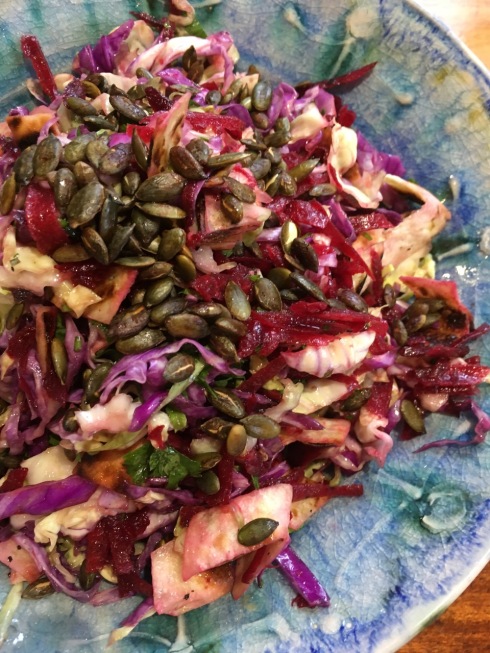 My son Darragh came up with this recipe. He was home for Xmas and knocked this up for lunch one day. I had just come in from a walk and was ravenous. I thought this was delicious. The lightly pickled cabbage, grated beetroot, toasted seeds and something else that had a very interesting texture and flavour but wasn’t a vegetable. It was double toasted, shredded tortilla wrap. Highly recommended especially served with tahini sauce.

The recipe will make a large bowlful. Scale the recipe down proportionately if you want less.

Not yet named salad

Peel the garlic then finely chop – crush in a mortar if you have one – together with a little salt. Mix with 2 tbs olive oil . Leave aside.

Wash and tidy up the cabbage then slice thinly.

Begin slicing from the top of the cabbage, then half way down cut the cabbage in half and remove the stem. Finely slice the remaining cabbage

Put into a large bowl and toss with a teaspoon of salt. Leave the cabbage aside.

Peel and grate the beetroot.

Heat a small frying pan, turn the heat to medium and add the pumpkin seeds. Gently toss or stir until they begin to colour and smell a little toasty. Remove the pan from the heat and sprinkle over soya sauce or tamari. Tip into a bowl and put aside to cool.

Heat a large frying pan then reduce the heat to medium and fry the tortillas, on at a time, cooking each side until it becomes a little toasty (not burnt). Brush the tortillas with the garlic oil and cook briefly once again. Stack the tortillas then roll them into a loose cigar. Cut on the diagonal to make wedge shaped pieces.

Put a clean t-towel on the counter. Put the cabbage handfuls at a time over half of the towl – don’t tip the bowl because all the excess liquid will follow. Fold the t-towel over the cabbage and pat dry then gently roll the towel and pat again . Tip the cabbage into a clean dry bowl.

Drizzle over the olive oil and lemon juice then toss to mix.

Tip into a clean bowl and sprinkle pumpkin seeds on top. 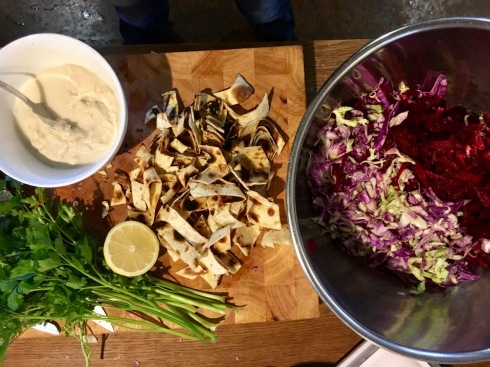 a pinch of salt

a little water to thin the sauce

Put all of the ingredients into a bowl except for the water and whisk until amalgamated. Thin with water to achieve a thick pouring consistency.

This salad is best eaten soon after making. Don’t forget to drizzle tahini sauce on top 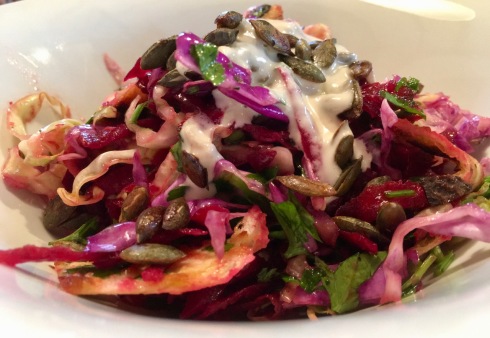