From our bedroom on the hillside of Kandy town we were woken each morning with the melodious chanting coming from the Buddhist temple. This was followed shortly after by the call to prayer at the mosque. We were staying with Bernard and Uma at their airbnb a short walk from the centre of town.

It had everything we needed. A comfortable bed with a mosquito net, a fridge to chill drinks and wonderful breakfasts. Each morning our hosts prepared ‘sri lankan’ breakfast which have infinite variations.

The first morning we were served pittu, which looks  for all the world like a large sausage but there was no meat in sight. 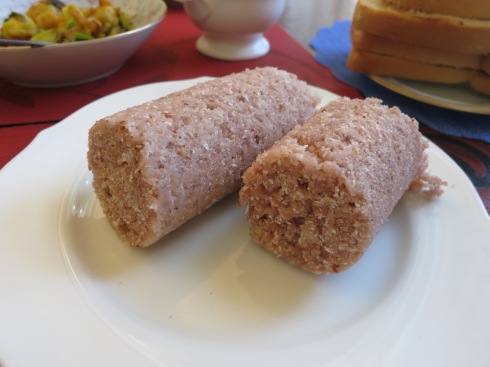 Pittu is made with a paste of ground red rice, coconut, a little wheat flour and salt. This paste is jammed into a tube that has a perforated end and sits atop a steamer. 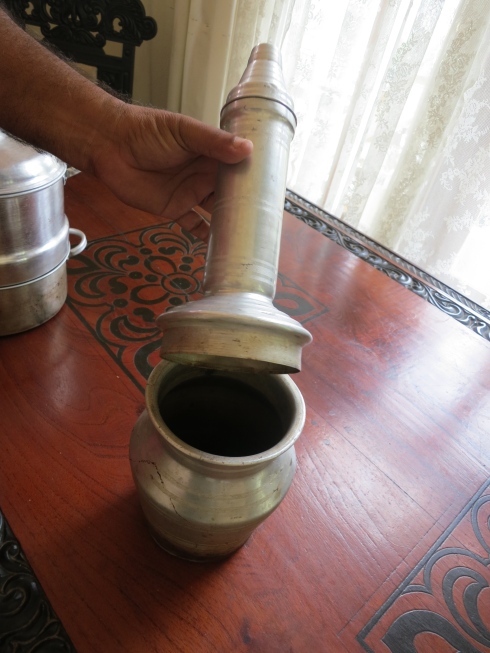 When cooked the pittu slides out of the tube and can be sliced. It’s served with dal spooned on top and leeks and potato on the side. All washed down with Ceylon tea.

Our second breakfast was the famous string hoppers. String hoppers are a noodle cake made with toasted brown rice flour mixed with water and salt. This paste is then extruded from an intriguing press onto little bamboo mats to make slim little noodle cakes which are then put into a steamer.

The string hoppers were served with kiri hudu, a coconut sauce made with saffron,cinnamon, ground dill seeds, onion and chilli which we spooned on top.

All accompanied coconut sambal and a dish of leeks, peppers, tomatoes and onions fried in coconut oil and  washed down with Ceylon tea

Our third breakfast was coconut roti served with a dal with curry leaves, spicy potatoes and  green beans in a coconut, onion and saffron sauce. And of course Ceylon tea

Each day there was also plate of banana, papaya and pineapple and a large stack of toast with an option of eggs. The toast was hardly needed and for me the eggs were a step to far. I was happily stuffed without them.

If you’re ever in Kandy do seek them out. You won’t be disappointed!