I was poking about in the freezer yesterday in search of peaches to make chutney and somehow burst a bag of blackcurrants. Suddenly there were hundreds of frozen blackcurrants on the move so I hastily closed the lid and carried on on my chutney mission. Late last night I remembered the blackcurrants and realised that they were going to be rolling about the freezer for ever if i didn’t do something. Luckily we had a bottle of poitin lurking in the cupboard. It’s been there for the past year as it tastes (to my mind) quite disgusting so today I headed out to the freezer armed with a large bowl and a torch and scooped the blackcurrants up.

I left them to defrost for while, then gave them a good bash and put them into a couple of large screw top jars. I divided the poitin between the two and now they are sitting on the kitchen counter.

The idea is to give the jars a shake every now and then and then just before Xmas strain them off and add sugar syrup.  I’m thinking of bottling it up for gifts and using some in the aperitif department to make Kir.

I’m not quite sure what the result will be but it’s definitely got potential!

I’m always curious and when I saw Ottolenghi’s recipe for spuds in last weeks Guardian I noticed there was an Iranian lime in it. 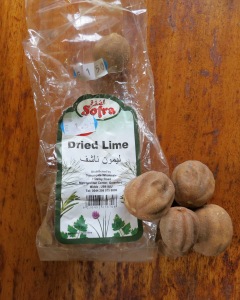 I had bought some dried limes in the Turkish supermarket some time back as I had seen a few recipes that called for limes but of course once I had some it seemed to go quiet on the dried lime front. This was the ideal opportunity for me to try them out. The recipe is quite simple ; spuds, butternut, onions etc., in a lightly spiced sauce. I didn’t have any butternut squash but I had a big Queensland Blue pumpkin which was an ideal substitute and of course I erred from the original recipe in a couple of other places too – scaling down the amounts and adding the fresh herbs toward the end rather than boiling them up.

The recipe began with cooking onions, cummin seeds and turmeric in clarified butter. I made some clarified butter – these instructions weren’t included in the original recipe – by gently cooking some butter in the pan until it frothed up and the milk solids went golden and sank to the bottom. I didn’t bother to strain it as I wasn’t bothered about the bitty bits, I just like the flavour, and continued as instructed. I didn’t have any tomato paste either so I grated fresh tomato in on top of the onions. This is always a handy trick when something like that is called for. I added in chunks of potato, pumpkin and the Iranian lime which I stabbed a few times as instructed and added a little salt and enough water tocover everything. Initially the lime bobbed about on the top like a life-buoy but with a little encouragement from my wooden spoon it did eventually submerge.

The oven was on and getting hot whilst the potatoes and pumpkin cooked until barely tender. Next in were a few quartered tomatoes, a whole chilli, a spoonful of currants (instead of barberries which I have never found in West Cork)  a bunch of spinach and a big handful of coriander and tarragon. I gave everything a big stir then dumped it into an ovenproof dish and popped it into the oven for about fifteen minutes. 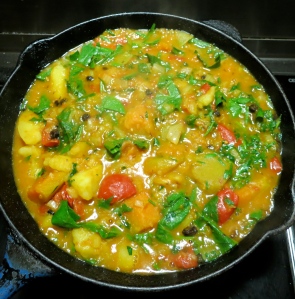 We ate this with rice and a dollop of yoghurt as advised and it was delicious. The lime gave a delightful tartness to the dish and chilli had a spectacular effect when my unsuspecting diner chomped it before realising. If you make this dish and don’t feel like spiking your audience maybe take it out before serving!! 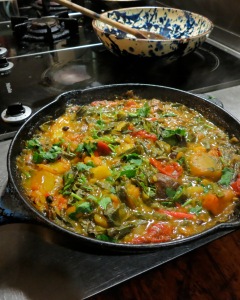 1 tomato or use 1 tbs tomato puree

1 whole chilli, split down one side

a small bunch of spinach