The Latest and Grated Beetroot Tabbouleh

Our quinoa ( keen-wah) is growing fantastically. It’s an experiment, I’ve never grown it before. It has become very popular recently and has a reputation as a superfood, it’s low in fat/high in protein/gluten-free and has lots of calcium. After reading an article that said all us greedy Westerners eating the quinoa was putting the Bolivians under financial duress I though I should make some effort to see whether it was possible to grow it here. It’s doing well after an initial hit and run by the chickens. The surviving plants look very healthy and flowers/seeds are appearing.

Of course there are always two sides to every story and I recently met a journalist who had just returned from Bolivia and she told me that the Bolivians are delighted that there’s a market for the quinoa, they just need to grow more to address the shortage. Apparently it grows like a weed so cultivating it isn’t a problem. This makes me happy, as I was feeling a little guilty about all the quinoa that we use.

The quinoa seems to be quite content growing here, but then who wouldn’t after the stunning weather that we have had in July. The real work begins with the harvesting and drying of the plant as there is a bitter coating of saponins on the grains that needs to be removed before consumption. I haven’t got that far yet and am only researching the next step but I’ll keep you posted.

Our latest craze in the shop is Beetroot and Mint Tabbouleh salad. It’s obviously not a true tabbouleh as it’s made with quinoa and not wheat – but it’s a very interesting, and it’s stunning to look at. We have two versions that we make, one where the beetroot is cooked and one where the beetroot is raw. At the moment we’re on the raw beetroot hit. We are have lots of ripe beetroots in our garden, there are three varieties, the standard purple, a golden beet and one that’s called Choggia which is a pink stripy number. 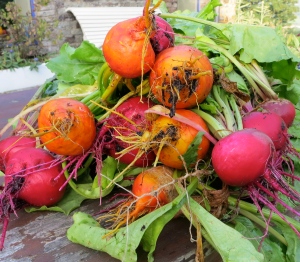 When they are grated they look beautiful.  Use any young beetroots that you can get your hands on to make this recipe. If you prefer to eat the beetroots cooked, just boil them until tender without peeling them, peel them when cooked and substitute them for the raw ones.

a large handful of chopped mint

a handful of  chopped parsley

the juice of 1 lemon

Put the quinoa and water into a saucepan with a pinch of salt and bring to the boil. Cover with a lid and turn to a low simmer and cook for ten minutes. Take the quinoa off the heat and leave to rest for five minutes then tip the quinoa into a bowl and leave to cool completely.

Put a pot of water to boil and cook the peas for two minutes. Drain and run under cold water then put aside.

Peel the beetroots and grate on the fat side of the grater.

Peel and chop the onion.

Cut the cucumber into quarters lengthwise then chop into an equal sized dice.

Put all the vegetables into a large bowl together with the quinoa and chopped herbs.

Put the Dijon mustard into a small bowl and whisk together with the olive oil and lemon juice then pour this over the salad. Toss everything together and season with salt and pepper to taste.

A cook that gardens. Sun addict. Not a good addiction in West Cork hence the travel addiction. Add in a splotch of kitchen snooping while away, a big walled organic garden while home and a kitchen full of a bit of everything. Runs an organic bakery/delicatessen/food shop with her husband using food from the garden and the years of accumulated kitchen snooping. Check out the shop and garden at www.lettercollum.ie END_OF_DOCUMENT_TOKEN_TO_BE_REPLACED
This entry was posted on Thursday, July 25th, 2013 at 4:23 pm and tagged with beetroot, herbs and posted in Salads. You can follow any responses to this entry through the RSS 2.0 feed.
« Cucumber Taste Experience
Happy Courgettes »

One response to “The Latest and Grated Beetroot Tabbouleh”