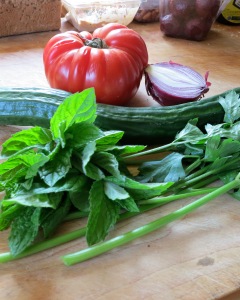 The fine weather has been doing it’s magic. The garden is happy and the vegetables are growing.

We are at the delightful stage of eating the ‘first’ of everything. Beautiful big artichokes eaten with a little vinaigrette to dip the leaves in, squeaky bright green French beans and cucumbers were all in last nights dinner.

The cucumbers are amazing. They taste just as they should – like cucumbers. There are no other words to describe cucumber flavour, unlike wines which can be likened to an amazing variety of things, cucumbers are fairly unique and taste of themselves. Unfortunately the cucumbers bought in the shops, cling wrapped or not, are well travelled and don’t deliver this taste impact. If I ever need reminding why we go to all the bother of growing our own vegetables I just have to think of this.

Now is the time to get down to the farmers markets and buy yourself a homegrown cucumber. You will appreciate what I am trying to say when you take the first bite.

We have fifteen cucumber plants growing in our tunnels and soon we will be awash with them. Our general plan is to be self sufficient in cucumbers until, hopefully, October. I have already picked the first bucketful and delivered them to the shop for the salads and all going well we’ll soon be tripping over them.

They’re not the easiest plant to establish. Cucumbers are like Princesses – rather fussy. They don’t like drafts and they don’t like to get their stems wet. They do like to drink a lot so we plant them in their personal mounds and water around them. The plants grow pretty tall, anything up to eight or nine feet high so they are trained up a piece of twine to stop them collapsing in a heap. One cucumber plant will produce about six or seven cucumbers a week so there’s plenty of eating to be done.

In celebration of the new season cucumbers I’ve sorted out some easy recipes ideas. Cucumbers are the fourth most cultivated vegetable in the world so the choice is global. Here’s a Turkish cucumber and tomato salad, a Lebanese yoghurt and cucumber salad and the classic French crème fraiche and lemon juice combo. I might also mention that cucumber and Marmite sandwiches are the business, I was bought up on those!! 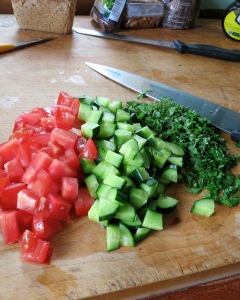 half of a smallish red onion

a handful of flat leaf parsley

a handful of mint

1 tsp sumac = optional but very nice if you have some

Peel and slice the red onion, cover with cold water and leave aside for 5 minutes. Drain, rinse with more cold water and put aside. This gives a milder and crisper onion.

Cut the tomatoes into thick slices – about 1cm thick then chop into an equal size dice.

Wash the green pepper, cut it in half and remove the seeds. Cut the pepper into slices , then dice.

Chop the parsley and mint.

Put all the vegetables and herbs into a bowl, sprinkle over a little salt, one teaspoon of sumac, olive oil and lemon juice and gently toss everything together. 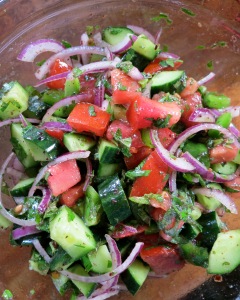 Cut the cucumber into quarters lengthwise then thinly slice.

Put into a bowl with all the other ingredients and mix well. 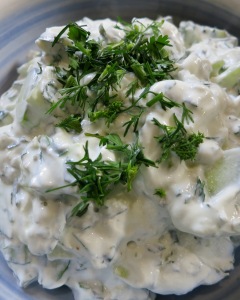 a handful of chopped dill

Cut the cucumber in half lengthwise. Scoop the seeds out of each half using a spoon and discard the seeds.

Slice the cucumber quite thickly, toss with a little salt and put into a colander or sieve. Leave aside for 30 minutes then pat the cumbers dry with some kitchen paper and put into a bowl. Mix the crème fraiche with the lemon juice and chopped dill then pour over the cucumbers. Toss everything together and season with salt (if needed) and a little black pepper 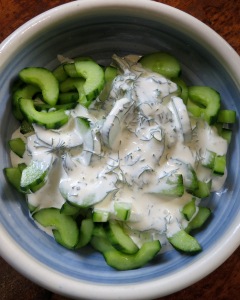 A cook that gardens. Sun addict. Not a good addiction in West Cork hence the travel addiction. Add in a splotch of kitchen snooping while away, a big walled organic garden while home and a kitchen full of a bit of everything. Runs an organic bakery/delicatessen/food shop with her husband using food from the garden and the years of accumulated kitchen snooping. Check out the shop and garden at www.lettercollum.ie END_OF_DOCUMENT_TOKEN_TO_BE_REPLACED
This entry was posted on Friday, June 28th, 2013 at 9:32 am and tagged with cucumbers, gluten free, herbs, Lebanese, salads, turkish and posted in General foodie news. You can follow any responses to this entry through the RSS 2.0 feed.
« Meals on Wheels
The Latest and Grated Beetroot Tabbouleh »