We arrived in Saigon last night, it’s officially called Ho Chi Min but everyone still calls it Saigon. It’s hot and steamy. We’re sitting in a 32c cloud, mosquitos and all. Not that I expect any sympathy!

We have become instant millionaires, the Vietnamese Dong comes in zillions. It’s quite difficult to get my head around. one euro is worth around 26,000 and something so everything sounds expensive but it’s actually dead cheap,

The food we have eaten so far has been a mixture of delicious and strange. Last night when we arrived we were very hungry having not eaten since our Bangkok breakfast and we took the advice of the hotel receptionist and went to an eatery around the corner. That was very strange. Today’s lunch was much more successful, We wandered through the streets in the general direction of the ‘War Remnants’ museum and by the time we got there we were hungry again. There was a vegetarian restaurant on the same block so we sauntered in and had a delicious feed of fresh spring rolls, 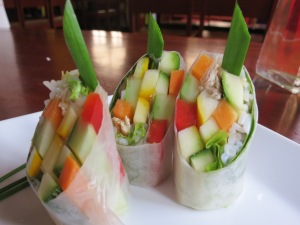 all washed down with carrot, celery and lemongrass juice

which was just the fortification that we needed as the war museum was quite a harrowing experience.

Anyone of a certain age will remember the Vietnam war and all the propaganda that went with it. The visual documentation is  disturbing. The exhibitions are a collection of news footage from all sides and nationalities and it just goes to prove what a waste of humanity it all was. We found it quite upsetting, the facts and figure would give anyone nightmares. Maybe it seems a strange thing to do on holiday but as a visitor to Vietnam what is in fact recent history is relevant in a perverse way. 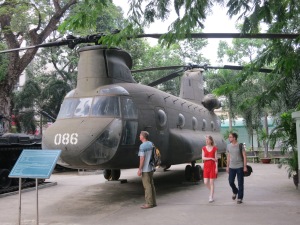 Now we have that out of the way I think we’ll concentrate on eating!

A cook that gardens. Sun addict. Not a good addiction in West Cork hence the travel addiction. Add in a splotch of kitchen snooping while away, a big walled organic garden while home and a kitchen full of a bit of everything. Runs an organic bakery/delicatessen/food shop with her husband using food from the garden and the years of accumulated kitchen snooping. Check out the shop and garden at www.lettercollum.ie END_OF_DOCUMENT_TOKEN_TO_BE_REPLACED
This entry was posted on Sunday, January 4th, 2015 at 11:38 am and tagged with vegetarian, veitnamese and posted in vegetarian, Vietnamese. You can follow any responses to this entry through the RSS 2.0 feed.
« Up Up and Away!
Lunch at the Jade Hotel »