Cooking on the Green Line

Kamal is involved in an initiative called ‘Make Food Not War” and today he took us to cook with war widows in Tripoli . 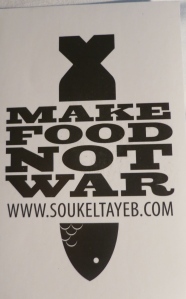 The idea is to bring people together through food regardless of religion and equip them with some skills that so that they can make a living. The group of women involved come from both sides of the warring factions and working together gives them common ground. We set off early this morning through the insane traffic  heading north out of Beirut. The roads are pretty much a free for all. There are very few road markings and basically all the cars go full pelt honking and weaving in and out all frantically trying to make progress. 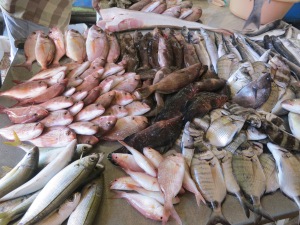 We stopped at a fish market on the way to pick up some fish for Sally to smoke – beautiful bright fish, bonito, tuna, parrot fish, garfish, sea bass, some of it still twitching. Sally selected a the sea bass,  a garfish and something we’re still not sure the name off.  The coast road is the main artery through Lebanon which is a surprisingly small country – no bigger than Co.Cork . It doesn’t look that small on the atlas  and of course it’s a completely different shape, long and skinny.   The closer we got to Tripoli the more road blocks we passed through and Tripoli itself is something of a full on war zone with fully manned tanks, machine guns and sand bags. The buildings are covered in bullet holes and some aren’t there any more at all. The building where the cooking initiative is held is right on the Green Line. Smack bang in the middle of the troubled zone. Luckily it was quiet today but it definitely added a certain edge, not our usual cooking location.

The doors were manned by armed soldiers and we were welcomed in and taken upstairs to meet the ladies.who were in the middle of making “maamoul’ sweet pastries to celebrate Eid al-Adha, the Muslim holiday which is this weekend. There was an enormous lump of dough on the counter and dates and nuts were being pounded to make the fillings.

They took a break to check out Sally’s fish smoking lesson.

They found the idea of smoking fish very strange.The idea of cooking fish in smoke didn’t appeal at all and they were looking at each other sideways, very sceptical. Sally, being the genius that she is at her craft soon had them filleting and brining then placing the fish on her jerry-rigged smoking gadget. Fifteen minutes later when the fish was cooked they were persuaded to have taste and  were absolutely amazed. Next thing the plate was empty! 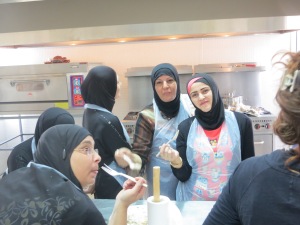 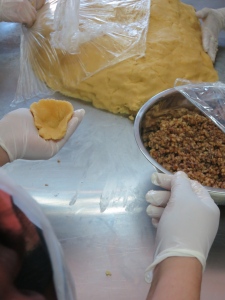 Here’s the recipe to make quite an enormous amount. Scale it down if you don’t want to supply a market stall!

Put the semolina on the counter, chop up the butter into small cubes, add the dried yeast and sugar and knead everything together. Gradually add the rose water and orange blossom water and keep kneading until silky. Leave covered with cling film for 2 hours

mix chopped walnuts with some sugar syrup and rosewater

Chopped dates with a little desiccated coconut, a little butter and sugar syrup. This needs to be pounded to a smooth paste.

Next take little walnut balls of the dough and press them into a circle in the palm of your hand. Put a little spoonful of filling in the middle and carefully pull the sides together to close the parcel. The little parcels are then put into moulds and press them to fit snugly them tip them off and rap them sharply to tip them out.

Bake at 180c until lightly golden. Let them cool off then dredge them with icing sugar. 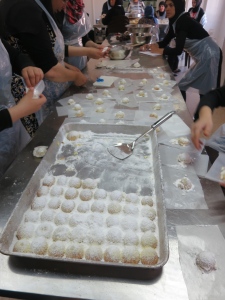 A cook that gardens. Sun addict. Not a good addiction in West Cork hence the travel addiction. Add in a splotch of kitchen snooping while away, a big walled organic garden while home and a kitchen full of a bit of everything. Runs an organic bakery/delicatessen/food shop with her husband using food from the garden and the years of accumulated kitchen snooping. Check out the shop and garden at www.lettercollum.ie END_OF_DOCUMENT_TOKEN_TO_BE_REPLACED
This entry was posted on Monday, October 6th, 2014 at 6:00 am and tagged with lebanon, sweet things and posted in General foodie news, Sweet Things. You can follow any responses to this entry through the RSS 2.0 feed.
« Beirut, Beirut
The Sporting Club »

2 responses to “Cooking on the Green Line”