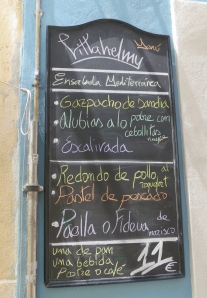 We’re  hanging out in Alicante. When we mentioned to friends that we were going to Alicante they looked at us as if we were cracked – it has such a reputation for lager louts, teabags, and chips . This may be true of the resorts, I can’t vouch for them, but Alicante, like many of Spain’s cities  has a thriving city centre complete with good food, culture and a beach.

I have been exploring cities with beaches for some years now, visiting cities that we can travel to, mostly via Cork airport, for a short break.

We set off this morning to check out the beach, it was a little busy at the city end but we walked along and there was plenty of space. It’s not a bad beach in the grand scheme of things, it’s clean and sandy and the sea is blue. When we needed some lunch so we wandered back through the small streets and found ourselves a sunny spot to sit,

The Menu del Dia is the way to go  in Spain if you  like good value local food. Our menu was ¢11 for four courses and a glass of wine which is quite phenomenal. It never ceases to amaze me and we enjoyed everything that we ate.

The lunch kicked off with a classic Spanish salad – lettuce, tomatoes, onions, tuna and olives and was then followed with a choice of three dishes. I chose the gazpacho, one the the ultimate sunshine dishes.

We shared a main course of Fideua de Mariscos. This is a paella type dish which is made with noodles instead of rice. It was a different version from the one that we are used to – larger macaroni type noodles. 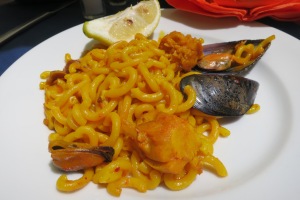 I had Flan de Coco, a take on the traditional creme caramel made with coconut, both were delicious although I was a little defeated at this stage.

All of this washed down with a glass of Alicante white wine cost us twenty two euro.

A cook that gardens. Sun addict. Not a good addiction in West Cork hence the travel addiction. Add in a splotch of kitchen snooping while away, a big walled organic garden while home and a kitchen full of a bit of everything. Runs an organic bakery/delicatessen/food shop with her husband using food from the garden and the years of accumulated kitchen snooping. Check out the shop and garden at www.lettercollum.ie END_OF_DOCUMENT_TOKEN_TO_BE_REPLACED
This entry was posted on Thursday, May 22nd, 2014 at 9:31 am and posted in General foodie news. You can follow any responses to this entry through the RSS 2.0 feed.
« Pak Choi Explosion
Courgette Trio »