Friday night was paella night, cooked by our Catalan neighbour. He makes a mean paella. It was so good, and we were so hungry that we didn’t remember to take any photos until we had eaten. We have one phone pic of a nearly empty pan and a pic of the contents of the nearly empty pan on the late diners plate. 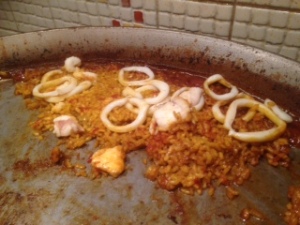 In fact by Friday night, rebellion had started to take grip and the detox began to fall apart. Five of the six fell by the wayside and had a glass of Rioja with the paella. The sixth neighbour was late and the bottle was empty.

It was an interesting week. We discovered that eating wheat, dairy and sugar free wasn’t too difficult but the funny thing that happened was the amount of animal protein that we suddenly consumed. On a regular week we might eat fish once and this would depend who cooks on a Friday as that’s the day the fish man is at the market  – last week we had two fish dinners and a chorizo hit. Maybe it was the lack of snacks that made us want to eat like that, who knows.

The community dinners are continuing but without such strict restrictions!

We eat so well and with so many variations that it doesn’t seem to make sense to deprive ourselves of food that we aren’t allergic to, each dinner is like a trip to a restaurant. Long live community dinners I say – it sure beats trashing our own kitchen every night! 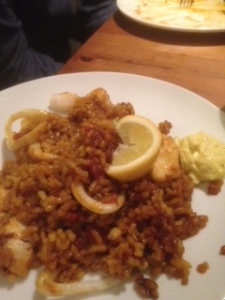 A cook that gardens. Sun addict. Not a good addiction in West Cork hence the travel addiction. Add in a splotch of kitchen snooping while away, a big walled organic garden while home and a kitchen full of a bit of everything. Runs an organic bakery/delicatessen/food shop with her husband using food from the garden and the years of accumulated kitchen snooping. Check out the shop and garden at www.lettercollum.ie END_OF_DOCUMENT_TOKEN_TO_BE_REPLACED
This entry was posted on Monday, March 24th, 2014 at 5:21 pm and tagged with community dinners and posted in Fish dishes, General foodie news, One pot wonders. You can follow any responses to this entry through the RSS 2.0 feed.
« Chorizo – Wheat-free, Dairy-free, Sugar-free!
Carrot, Avocado and Wakame Salad »