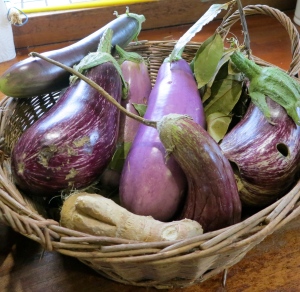 I was walking around the garden trying to decide on a recipe for this month. My first thought was the quinoa, which we have harvested and have stretched out to dry in the tunnel. Then of course there is also an inviting collection of pumpkins, which we’ll be eating for most of the winter. But when I walked into the tunnel and saw our mighty crop of aubergines it became obvious that this was the vegetable of the moment. We grew three different varieties of aubergines this year. Long mauve Thai ones, long skinny dark purple Chinese ones and chunky stripy Spanish ones and they are all ready to eat. 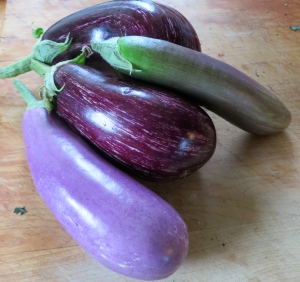 One of my first culinary adventures was to make a moussaka in a domestic science class at school. It’s a Greek dish that uses minced lamb and aubergines. I hadn’t got a clue what I was doing but was I was curious, it sounded so exotic.

My mum scoured the town for aubergines, which were relatively uncommon at that time, and I carted all the ingredients into school on a bus. The instructions must have said something like ‘fry the aubergine in oil’ which I followed to a T, pouring in more oil as the aubergine drank it up like a sponge. The resulting dish was quite disgusting and nobody wanted to eat it.

I have since learnt to salt the aubergines, not so much to eliminate any bitterness, but to slow down the oil absorption. And for a dish like moussaka I now brush the aubergines with oil and roast them in the oven rather than fry them in the pan..

Aubergines cooked this way have a wonderful velvety ‘meatiness’ which paired with Puy lentils makes a great vegetarian dish.

Puy lentils are King in the lentil world. –  also known as the caviar of lentils. They are grown in the sunny volcanic region of Auvergne in France and are protected with a designation of origin status (AOC).

They are more expensive than the other lentils but the beauty of these little blue/green gems is that they hold their shape when cooked.

Saying that, do cook them carefully. They don’t require any soaking and will take about twenty minutes. I start checking just before the twenty minute mark – just pop one in your mouth and if it’s tender they are done.. 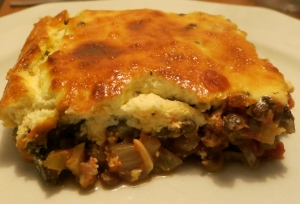 Put the lentils into a pan and cover them with water, add the bay leaf. and bring to the boil. Turn down to simmer, cover with a lid and cook for 20 mins, until the lentils are tender. Drain off any remaining liquid and discard the bay leaf.

Slice the aubergines lengthwise , not too skinny as they’ll shrink slightly whilst cooking – a little less than a centimetre thick. Sprinkle with a little salt and leave them to sweat for about half an hour

Dab the liquid that will have accumulated on the aubergines with kitchen paper or a clean t-towel to dry them off.

Bake in the oven for about 15=20 mins. The aubergines should be soft but not crispy.

Peel and chop the onion, chop the celery and sautee together in a little olive oil When they are soft and translucent add the chopped garlic and cook for a couple of minutes longer then add the tomatoes and cook for about 30 mins. Stir in the drained lentils and season with salt and pepper. Add the chopped basil or oregano.

In a bowl mash the ricotta together with the eggs then beat in the cream. Stir in the grated Parmesan and season.

A cook that gardens. Sun addict. Not a good addiction in West Cork hence the travel addiction. Add in a splotch of kitchen snooping while away, a big walled organic garden while home and a kitchen full of a bit of everything. Runs an organic bakery/delicatessen/food shop with her husband using food from the garden and the years of accumulated kitchen snooping. Check out the shop and garden at www.lettercollum.ie END_OF_DOCUMENT_TOKEN_TO_BE_REPLACED
This entry was posted on Thursday, September 26th, 2013 at 9:53 am and posted in General foodie news, gluten-free, Greek, vegetarian. You can follow any responses to this entry through the RSS 2.0 feed.
« Apple Mania
Fatty Prawns and Borlottis »