I’m back in Barcelona and yesterday we spent a day out of the city at the allotment. This involves the metro and a train journey. Walking out of the station it all sounded so different – no wah wahs, no traffic or bustling people, just a lot of space and birdsong. We walked from the station through the small town of Molins de Rei, then along paths through fields of wildflowers to the allotments.

I last saw the allotment in November when it left a lot to the imagination. It had just been taken over and was  a patch of thistles and weeds. Some trojan work has happened since then and it is now a slug free paradise where all the vegetables are four times size the size of mine. At least four times the size of mine as most of the vegetables in our garden are far from the stage where they will land on a plate. 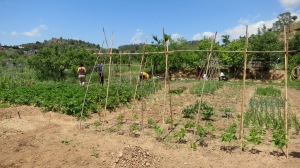 And no slugs! They just aren’t a problem here. Apparently their cousins, the snail, can be a pest but it’s so dry it just isn’t a good terrain for something that relies on slime to get around.

The vegetables look really healthy. There’s been enough rain this spring to keep everything lush and green and there are beds of pert looking onions and garlic, chard, tomatoes, peppers, aubergines. beans, peas, salads and herbs .

Our friends were already hard at work when we arrived. They had also installed a large bucket full of ice, chilled water and beer to go with the picnic we had all bought along. We settled in under the trees – no self respecting Spaniard would sit in the sun – and ate the picnic before tackling the weeds, picking and watering. There weren’t many weeds to be honest. Another perk of a drier climate but the watering is a mammoth task. The vegetables are planted in beds with little moats between to hold the water and it’s a serious business ensuring there’s enough for everything to prosper. This was the job that I volunteered for, watering being an A1 all round tanning opportunity, whilst the rest of the team set to picking the beans and peas 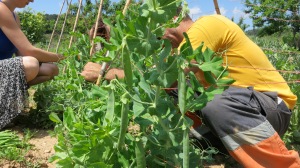 We headed back to the city with an enormous bag of vegetables for our dinner. 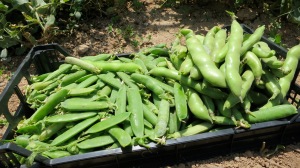 A cook that gardens. Sun addict. Not a good addiction in West Cork hence the travel addiction. Add in a splotch of kitchen snooping while away, a big walled organic garden while home and a kitchen full of a bit of everything. Runs an organic bakery/delicatessen/food shop with her husband using food from the garden and the years of accumulated kitchen snooping. Check out the shop and garden at www.lettercollum.ie END_OF_DOCUMENT_TOKEN_TO_BE_REPLACED
This entry was posted on Tuesday, May 14th, 2013 at 2:22 pm and posted in General foodie news. You can follow any responses to this entry through the RSS 2.0 feed.
« Dinner from the Bottom of the Vegetable Basket
What the squid ate for dinner! »