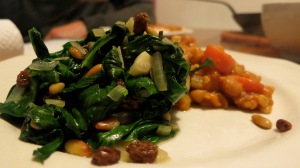 I headed up to the garden this evening to gather some salad and was instead seduced by the spinach which has really taken off. I picked a bucketful of it. Bright green and perky. This threw the dinner plans in a different direction altogether. By the time I arrived back in the house I was thinking of the Spanish dish of ‘Espinacas con Pasos y Pinones’ -Spinach with Raisins and Pinenuts. This dish was heavily influenced by the Moors and gives a slightly sweet and exotic twist to what would otherwise be plain wholesome spinach. This alone did not add up to a dinner , even though Popeye would have been delighted , so I made a pot of Fassoulia, which is a Lebanese stew of beans, barley and vegetables  to go with.

I have to admit to getting a little creative with the Fassoulia recipe as without pre planning I did not have any soaked cannelini or haricot beans at hand. I rummaged around on the tin shelf and came up with a can of chickpeas which I was going to use but then I came across a can of baked beans. The recipe called for cooked beans, canned tomatoes and tomato puree so I decided to go down the baked bean route and it worked out fine. The slight nuttiness of the barley and the soft beans was a great combination, I ‘d say it was better than a chickpea substitution. It sat together perfectly with the spinach.

Put the raisins in a bowl and cover with boiled water. leave aside for thirty minutes then drain

Put the pinenuts in a dry pan and gently toast until they are golden.

Wash the spinach and remove any thick stems.

A cook that gardens. Sun addict. Not a good addiction in West Cork hence the travel addiction. Add in a splotch of kitchen snooping while away, a big walled organic garden while home and a kitchen full of a bit of everything. Runs an organic bakery/delicatessen/food shop with her husband using food from the garden and the years of accumulated kitchen snooping. Check out the shop and garden at www.lettercollum.ie END_OF_DOCUMENT_TOKEN_TO_BE_REPLACED
This entry was posted on Wednesday, March 20th, 2013 at 10:14 am and posted in General foodie news. You can follow any responses to this entry through the RSS 2.0 feed.
« Toonsbridge Buffalo Gnocchi
Power Bread »