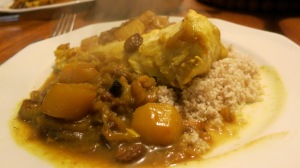 I was standing in the queue waiting to buy fish at the market this morning when I spotted a monkfish and remembered a recipe that I cooked ages ago with sultanas and ginger. The recipe was in the Moro East cookbook and it was the odd combination of fish and sultanas that made me curious.  As I remember it was delicious so that’s what we’re having for dinner tonight except that I can’t find the cookbook. I vaguely remember lending someone a couple of cookbooks – most unlike me as I don’t usually like them to wander – but I can’t remember who I lent them to so if you read this and have any information please jog my memory!

Meanwhile here’s the version we had . It was subtly sweet and fragrant and the monkfish was cooked on the bone which kept it super succulent. The timing is a bit tricky when cooking a piece of fish like this on the bone. The general guideline is that it should take about half an hour for a kilo piece in a hot oven but I found it took slightly longer. The piece that we had weighed about 600g so I cooked it for twenty minutes, then turned it over for five minutes but when we sat down to eat it was slightly underdone so I wacked it under the grill for a few minutes and that did the job.

here’s my version which we ate with couscous and fed two of us – we did roll away from the table!

6 small waxy potatoes – peeled and cut into even sized chunks

a pinch of saffron infused in hot water

Put a an oven proof pan on the heat and when it’s hot add enough olive oil to cover the bottom  of the pan and the onions. Give them a good stir and when they are sizzling away sprinkle with a little salt and turn the heat to medium-low. Cook until the onions become  golden , this will take ten to fifteen minutes, stirring regularly.

Add the garlic, give a quick stir  then drain the sultanas and mix everything together. Cook on a medium heat for five minutes then add the spices and cook for a further minute or two. Stir well so that they cook evenly. Pour in the water and infused saffron then bring to the boil .

Put the potatoes in the sauce , seaon with alittle salt and bring everything to the boil. Cover the pan with a lid or piece of foil and put into the hot oven. Cook for twenty fives  minutes then check that the spuds are tender.

Season the piece of monkfish and squash into the middle of the pan then put the lid/foil back on and cook for twenty five minutes.

Take the pan out of the oven and turn the piece of fish over and cook for a further five minutes.

To serve, simply use a sharp knife to cut the fish from the bone and eat together with a little couscous

A cook that gardens. Sun addict. Not a good addiction in West Cork hence the travel addiction. Add in a splotch of kitchen snooping while away, a big walled organic garden while home and a kitchen full of a bit of everything. Runs an organic bakery/delicatessen/food shop with her husband using food from the garden and the years of accumulated kitchen snooping. Check out the shop and garden at www.lettercollum.ie END_OF_DOCUMENT_TOKEN_TO_BE_REPLACED
This entry was posted on Saturday, March 2nd, 2013 at 1:32 pm and posted in General foodie news. You can follow any responses to this entry through the RSS 2.0 feed.
« Beans and Chips
Toonsbridge Buffalo Gnocchi »