Last nights dinner vision was  Roasted Tomatoes, Kalamata olives and Hake with potato gratin on the side.

What we actually got, three and a quarter hours later was just cooked tomatoes, and overcooked hake. The spuds were perfect except that they were burnt on the bottom!

I’m blaming this on a remarkably bad oven! The cooker doesn’t look bad, it’s quite new and the hob works well but the oven is definitely duff. It’s  a gas oven which heats from the bottom and obviously heats very slowly until it suddenly reaches incineration point.

I turned the oven on (220c) to give it a chance to warm up and prepared the potato gratin. I peeled and sliced the potatoes thinly and tossed them in bowl with some olive oil, oregano and salt, put them in layers in an oiled earthen ware dish and popped them into an oven. l covered the top with some parchment paper so that they wouldn’t brown to quickly. For the tomatoes we had three ripe fatty tomatoes which I cut in half across the middle and jammed into another ovenproof dish, cut side up. I seasoned them with salt and pepper and drizzled olive oil over them and threw on some kalamata olives. 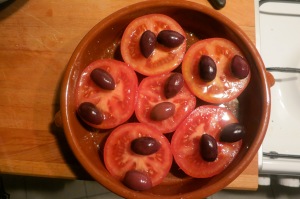 These joined the potatoes in the oven. Thirty minutes later I poured a little white wine into the potatoes. The oven still didn’t feel very hot so we cranked the temperature up to 270c.

Two hours on, the potatoes were getting tender, the tomatoes barely bubbling and we were very hungry. I took the paper off the top of the spuds to let them brown a little on top while they finished up cooking and popped the fish into the tomatoes. 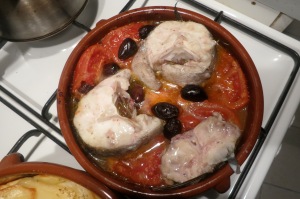 At this stage it was 10.45 and we were hungry. we poured ourselves a glass of wine and promptly forgot about the oven. Half an hour later the oven was like a kiln, from the bottom up, and the dinner was ready in it’s various guises. It was tasty, even though the fish was overdone, but then again you’re happy to eat anything at quarter past eleven!

A cook that gardens. Sun addict. Not a good addiction in West Cork hence the travel addiction. Add in a splotch of kitchen snooping while away, a big walled organic garden while home and a kitchen full of a bit of everything. Runs an organic bakery/delicatessen/food shop with her husband using food from the garden and the years of accumulated kitchen snooping. Check out the shop and garden at www.lettercollum.ie END_OF_DOCUMENT_TOKEN_TO_BE_REPLACED
This entry was posted on Saturday, January 26th, 2013 at 9:18 pm and posted in General foodie news. You can follow any responses to this entry through the RSS 2.0 feed.
« Sunshine in a Bowl
Dinner for a Wild Wet Night »